Still in the spirit of celebrating – the International Women’s Day, Mother’s Day and other campaigns for women – we would like to celebrate our Great African for the month of March – Ndifreke Andrew-Essien.

Ndifreke Andrew-Essien (born August 26th) is the Executive Director and founder of Freky Andrew-Essien Care Foundation well known as FAECARE Foundation, a Non Profit Charity Organization that adds value to the lives of vulnerable groups: Orphans and Vulnerable Children, Persons With Disabilities, Youths, and less privileged in society. She has worked and volunteered with International and local NGOs and has had a stint as a presenter of her own program on radio and television. A Motivational speaker and a Music minister with a passion for God and life.

Freky as she is fondly called has a heart of gold and is an inspiration to many, because she defied the odds in her life and is making something purposeful out of it. In 2002, she was involved in a major accident which resulted in Spinal Cord Injury and paraplegia and the use of a wheel chair. She returned to school – against all odds to earn a Bachelors degree in Physiology from the University of Port Harcourt in 2008, and an MSc in 2014. 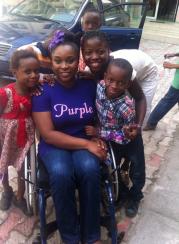 Some Services and Honors

Below are some services and honors of Freky Andy:

Freky represents the strength and resilience of an African. She is passionate and committed to affecting her community in every way she can.

My goal is to live legacy and affect generation(s), by adding a little extra (passion, focus, creativity) to the ordinary to make it extra ordinary.

You could connect with Freky on Twitter @FrekyAndy or visit http://www.faecarefoundation.org to learn about her work.

The African Youth Corner (AYC) will be hosting a Twitter Chat on the 8th of March 2016 to mark the International Women’s Day. The theme for this year’s IWD is #pledgeforparity. The chat will be focused on Addressing Gender Equality.

As the Executive Director of the UNWOMEN,  Phumzile Mambo-Ngcuka said:

The guests on the chat are:

Freky Andy: Freky is a passionate lady with a very large heart. A Mandela Washington Fellow, Freky is the Executive Director of the FAECARE Foundation.

Daberechi Okedurum: Daberechi is an ideator and social entrepreneur. He is actively involved in youth development and is a Sidney Parnes Global Fellow on Creative Thinking.

Chat commences at 1400GMT (2pm Nigerian Time) and promises to be enlightening and interesting.